All eyes will be on Wednesday’s UK CPI data, as we see whether inflation breaks 10%. We’ll also have updates on the UK labour market, eurozone and Japanese CPI, US and UK retail sales, and US existing home sales, while earnings are due from Henkel, Compass, BHP, Walmart, Home Depot, Cisco, Deere & Co and Foot Locker.

Early on Monday morning Japan released its preliminary Q2 GDP data, followed by Chinese and Japanese industrial production updates. In the US this afternoon, keep an eye out for the NY Empire State manufacturing index. Earnings come from consumer goods company and DAX component Henkel, and residential real estate broker Compass, while late Monday evening in the UK (early Tuesday morning in Melbourne) we’ll get the latest figures from mining group BHP.

Trade metals, energies and other commodities with Intertrader.

Two Dow components, US retailers Walmart and Home Depot, report to the market on Tuesday. Walmart was last week reported to be in discussions with major media providers as it considers adding streaming TV to its membership service. The UK labour market is in the spotlight with the latest average earnings and claimant count change, while we’ve also got the German and eurozone ZEW economic sentiment reports, eurozone trade balance and, in the US, the July building permits, housing starts and industrial production.

Go long or short of a wide range of stock indices. 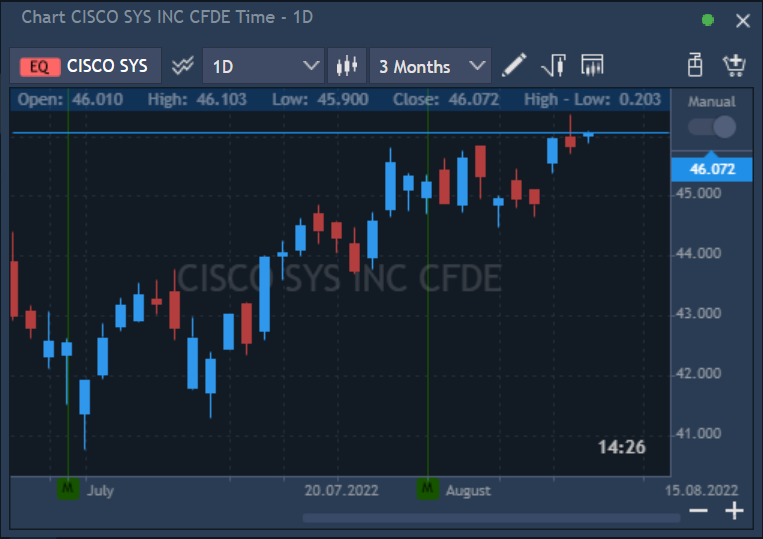 UK inflation will again be in the news as the July CPI update is published on Wednesday. Other notable data includes the Japanese trade balance, eurozone GDP and US retail sales. Meanwhile, tech conglomerate Cisco leads the earnings, the Dow component having last week revealed that it suffered a cyberattack in May 2022. Figures are also due from semiconductor maker Analog Devices, UK housebuilder Persimmon, smart tech firm Synopsys, UK infrastructure group Balfour Beatty, silver and mining firm Hochschild, plus US retailers Lowe’s, Target and TJX.

Buy or sell hundreds of UK, US and German equities.