Although the week is disrupted by holidays in the US and the UK, there will be ample data to digest, including German and eurozone inflation figures, French and Australian GDP updates, and the influential US nonfarm payrolls on Friday. Earnings include Salesforce, siblings HP and HPE, Ambarella, PVH, Broadcom, Lululemon Athletica and Hormel.

While the US celebrates Memorial Day on Monday, in Europe we’ll see the latest eurozone business climate and consumer confidence data. Inflation is also in the spotlight with the German revised CPI figures for May due to be released at 1pm (UK time). Preliminary figures earlier this month showed annual inflation in Europe’s largest economy at a new record high of 7.4%.

Trade a wide range of global stock indices with Intertrader. 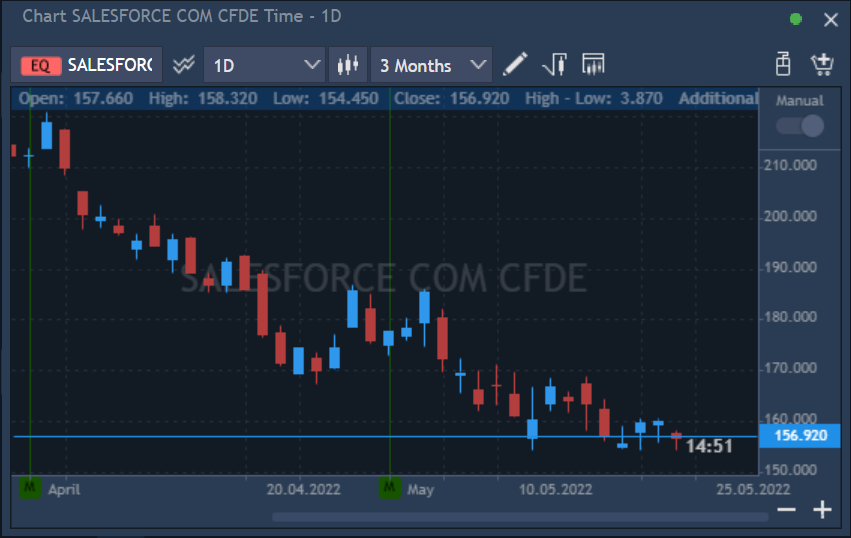 May manufacturing PMI data is released on Wednesday for Japan, China, France, Germany, the eurozone, the UK and the US. Also keep an eye out for Australian GDP, eurozone unemployment and the ISM’s manufacturing PMI for the US, plus the Fed’s beige book report on current economic conditions. Earnings include enterprise IT firm HPE and US clothing brand owner PVH, which recently announced plans to introduce regenerative textile fibre across its product lines.

Semiconductor firm Broadcom, currently in talks to acquire cloud service provider VMware, will report to the market on Thursday. Figures are also due from sportswear retailer Lululemon Athletica and food processing company Hormel. Look out for the Australian trade balance and US nonfarm productivity and factory orders, while the latest OPEC meeting should also be watched closely for any increase in oil production.

Buy or sell oil, metals and other popular commodities.

While the UK enjoys an extra bank holiday to celebrate the Queen’s Platinum Jubilee, analysts will be chewing over German trade balance figures, plus the latest French, German, eurozone and US services PMI data, along with the ISM’s non-manufacturing PMI report. Friday’s data highlight is the US nonfarm payrolls, due at 1.30pm (UK time). Last time out the US economy added 428,000 jobs, slightly ahead of expectations. It’s a mixed week for data with flash manufacturing and services PMI updates due for Australia, France, Germany, the eurozone,... read more